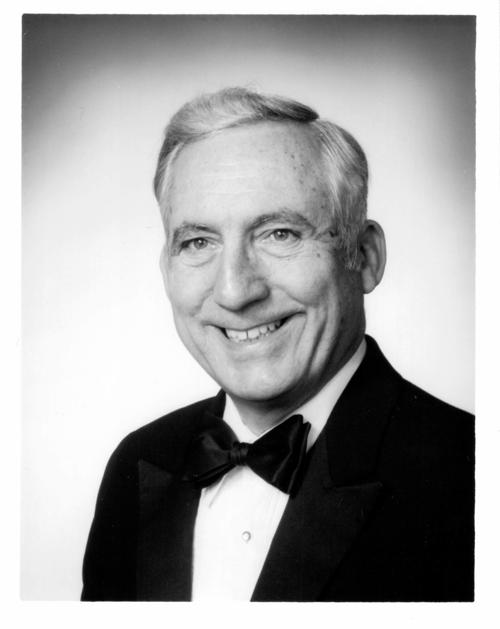 Walter E. Reitz was born in Olean, New York in 1921. He attended elementary school in Olean, School 19 and Lafayette High School. Walter attended the State College at Fredonia where he graduated with a music degree. During college he joined the U.S. Army Enlisted Reserve Corps. As a result, he served in the Army as a flight radio operator, including a stint in the South Pacific during World War II. After graduating from Fredonia, he did graduate studies at the University at Buffalo where he earned a masters degree in school administration. Reitz taught for one year in Chautauqua County, and then came to Amherst Central, where he eventually held title of Coordinator of Music for the six Amherst schools.

According to Walter’s family, one of his fondest achievements was producing the annual operettas at Amherst High School from 1950-1977. One of his goals was to involve as many students as possible in the productions, some involving more than 300 students. Students learned much more than music in his classes. They learned about quality, dedication, and commitment, things they could use even if they did not pursue a musical career. He put his body and soul into these productions, working every night and on weekends with the students. During the first Music Man production, he housed a horse in his garage on Kings Highway during the week of the program so that the “Wells Fargo Wagon” could be pulled by a real horse when it came on stage. The visual of this live horse pulling the Wells Fargo Wagon onto the stage at Amherst Central High School is one that many will never forget. (The neighbors who saw the horse walking the two blocks from Kings Highway to the high school will also never forget it!). In addition to producing the school operettas, Walter started both the Sweet Sixteens and Varsity Singers, and directed the Shrine Chanters for over 30 years. Reitz retired from the Amherst school district in 1977.

Walter E. Reitz founded the Amherst Male Glee Club as an adult school activity of the Amherst Central School District in the fall of 1948. He has continued as its musical director for the entire 56-plus years of its existence. He admits to missing perhaps one or two rehearsals over that period, but has been there for almost every Thursday night from September through May throughout all of those years.

What began as an annual program attended only by families and close friends of the members has grown over the years into a Broadway-style musical revue now known as the “Red Blazer Varieties”. The Red Blazer Varieties has played to thousands and thousands of patrons over the years during its three-night run each spring at the Amherst Central Theatre Auditorium. Complete with professional scenic design and lighting, choreography, black-out sketches, and guest performances, the show has become a very popular theater event on the Niagara Frontier. Walter Reitz is the producer and director of the entire production: he selects all of the music, rehearses the chorus for months in preparation for the show, plans the program segments and suggests scenic ideas, selects guest artists and directs the chorus and the pit orchestra. Walter’s many years of directing Amherst High School operettas have prepared him well for this monumental task.

The Glee Club has been a member of the Associated Male Choruses of America for many years and has participated in regional “Big Sings” in western New York, northwestern Pennsylvania and southern Ontario on an annual basis. In addition, it has traveled to international “Big Sings” at Grand Rapids, Michigan, Winnipeg, Manitoba, and Marquette, Michigan, and was the host chorus in 1998 for an International Big Sing held at the Convention Center in downtown Buffalo. This event included over 40 male choruses from the eastern and Midwestern United States and southern Ontario and almost 2,000 men assembled on stage for the presentation of massed choral members. The Glee Club’s participation in the Associated Male Choruses of America on this level has propelled Walter Reitz into prominence well beyond the Niagara Frontier. His personality, his conducting style and his gentle sense of humor make him perhaps the best known and most admired musical director in AMCA.

For the last 25 years, the Glee Club has been an independent not-for-profit corporation and currently boasts a membership of more than 50 singers. Walter Reitz has inspired all the men of the Amherst Male Glee Club and has instilled in them the love of music in general and of male choral singing in particular. He has truly enriched the lives of the Glee Club members and has entertained many thousands of Western New Yorkers throughout his career. The members of the Amherst Male Glee Club, past and present, congratulate Walter on the occasion of this most prestigious award.

Walter Reitz has been married since 1945 to the former Evelyn Goyne. Their three sons are all graduates of Amherst: Robert ‘67, who is an Executive with GE Water Technologies in Philadelphia, David ‘71, who is Deputy General Counsel for National Fuel Gas Supply Corporation, and Raymond ‘74, who is a district administrator for the school system in Chapel Hill, North Carolina. The Reitzes have seven grandchildren and four great-grandchildren.

It is a distinct honor of the Amherst Central Alumni Foundation, Inc. to award to Walter E. Reitz the 2005 Distinguished Educator Emeritus Award. It will be especially fitting to present this award to Walter during the Diamond Jubilee Concert on July 29th, 2005 as part of the 75th Anniversary Celebration of Amherst High School. In the audience will be many of his former students saluting this very special gentleman who has been a mentor and friend to so many of them over the years. 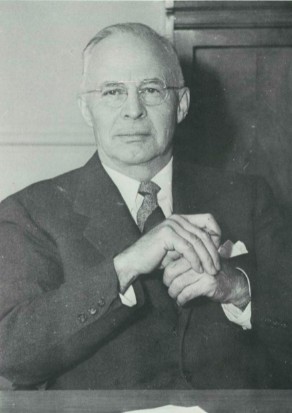 In 1929, the Buffalo Board of Education ruled that the high school children of Amherst could not continue to be tuition students at Bennett High. Our wise Board of Education combined the School 13 and 18 districts and formed Amherst Central High School. They began work on a high school building and in 1930 hired Philip A. Schweickhard, with 20 years of school experience in Minnesota, to head our new school. Some 200 high school students were housed at School 18 until the new building was ready. One of Mr. Schweickhard’s first changes was to have the markers, Boys entrance and Girls entrance removed so students could use any door they liked.

His work with parents and students set a pattern for the teachers he hired. He was always open to new ideas. One day he called Art Pankow to his office and suggested that Art start an alumni association, “to keep the family together in the years ahead”. He would be very pleased with our 75th celebration this July.

Mr. Schweickhard retired in January 1961 after being elected President of the New York State Principals Association in the 1940’s. He took great pride in “his” school and the work of students, staff and faculty.

Mary Schweickhard Spooner ’36 wrote to the Alumni Foundation that she remembers that her father was rarely home during the summer of 1930, preparing the school for opening in September. As an 11-year-old, she installed the combination locks on all of the lockers and recorded the combinations in two places.

According to Myrella Smith Nagel ’38, “Mr. Schweickhard was the Rock on which the structure of Amherst was built. He set the standards, which have come down through the past seventy-five years that make Amherst the special and outstanding school it is today.” Mrs. Nagel stated that some of the names of unusually gifted early Amherst teachers hired by Mr. Schweickhard include John Scheller, Alice Berger, Milton Bergman, Marjorie Brauch, Myrtle Christiansen, Mary D’Amico, Helen Fisk, Isabel Craik Husband, Rufus LeFevre, Carl Minich, Edna Polster, Robert Rowley, Robert Schonewolf, Peter V.R. Steele, Beulah Thompson and Elsie Walker Waldow. He was also instrumental in hiring outstanding staff members like Nurse Emma Coyer and the beloved custodian of Amherst’s early years, George Thurnherr.

Elsa Jung Kreiner ’38 wrote that “Philip Schweickhard was a no-nonsense man, who instilled loyalty and honesty in his students. He was a Principal with principles! A man respected by the faculty and student body, who led by example.”

The Class of 1936, the first class to spend its entire six years at Amherst, dedicated their yearbook to him for “His dedication, his inspiring advice, and in admiration of his genuine understanding, and in appreciation for his earnest efforts.”

On April 28, 1955, on the 25th anniversary of A.C.H.S. the Amherst Bee said, “No tribute too great can be paid to Philip Schweickhard who organized the school as its first principal. He is now the supervising principal for the district. It is under his wise and understanding leadership that Amherst Central High School right from the start, achieved the aim of every school; to graduate young people who are educated to take their places in the world.”

It is a distinct honor of the Amherst Central Alumni Foundation, Inc. to award to the late Philip A. Schweickhard the 2005 Distinguished Educator Emeritus Award.