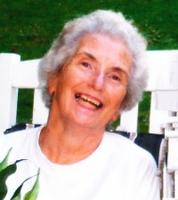 She was employed for about 25 years as a secretary in the Registrar’s Office of SUNY Alfred.

Joan loved to travel, enjoyed working in her flower garden and was an avid reader (mostly novels).  For many years she enjoyed going on her daily walks, long before it became fashionable.

The family of Joan M. Speca will receive friends on Friday from 4:00 PM – 6:00 PM at the Dagon Funeral Home, 38 Church St., Hornell, NY, where funeral & committal services will be held at the conclusion of calling hours at 6:00 PM with Deacon Robert McCormick officiating.  Burial will be in St. Mary’s Cemetery.

Joan’s family request that memorial contributions in her name be made to the Alzheimer’s Association, 435 East Henrietta Road, Rochester, NY 14620.  Memorial forms will be available at the Dagon Funeral Home or click here to print a form.