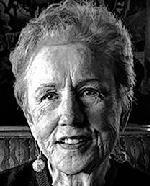 Krathaus, Joan F. ALBANY Joan Krathaus, a longtime member in the artist community in the Capital District, passed away peacefully on March 26, 2020, at the Teresian House in Albany. She had been under their care for the last few months with congestive heart failure. She was 85 years. Joan was born on February 18, 1935, to Joseph C. and Marion F. Betz in Buffalo. She lived in Buffalo until 1967 when she moved with her husband James R. Krathaus to Delmar, where as a young mother became involved with not only raising her two children, but a variety of passions that fueled and filled her soul. In her early years, she began collecting, refinishing and reselling antiques out of her garage. She scoured old barns, estates and auction houses in the Heldebergs with her good friend, Ursula, hauling old sideboards and dressers in the trunk of her land-yacht Buick. Her home soon became replete with a variety of antique and art collections. German bisque dolls (hundreds of staring eyes in the house), brass bells, beaded flapper purses, cloisonne, Vermont pottery, blown glass, clocks, and lots of art. She loved the thrill of the hunt, seeing and bringing life into something old and so appreciated how humans create beautiful things. During this period, while enjoying one of many trips to Thacher State Park with her kids, she suffered severe injuries after a fall from a cliff, when a boulder gave on the path. She spent years in recovery from countless surgeries to her face and legs, but this never stopped her, and it only made her tougher, mentally and physically. She personified the creative spirit and always had a project. In the '80s, she began creating large, raised gardens filled with sculptures, unique rocks, boulders, driftwood and crafted oddities she collected on her travels. Happiest getting her hands dirty and toiling until dark, she was exceptionally proud of her manure and compost piles that made her flowers bloom. Through the years her gardens were featured on many home and garden tours. In the end, it was her art that brought her the most happiness. In her late-40s, she went back to college and enrolled in The College of Saint Rose to pursue a degree in painting. She was prolific. Creating hundreds of works over the decades, with her early paintings of realistic landscapes and scenes from region, but shifting into her signature abstract mixed media collages with layers of explosive color and abstract forms. The delight for her in these abstract collaged works was the pursuit of the unknown, akin to unlocking a mysterious story that unfolded over time with experimentation. Instinctively, she would layer and weave mundane print clippings and various other bits into the work and then veil them in swaths of rich, saturated color. Never satisfied and highly passionate, she destroyed her earlier realistic paintings to make room for the abstractions in her increasingly filled studio basement. She continued to paint everyday until quite recently when her health was in decline. She said she was "ready to go" when she couldn't create anymore. She will be remembered for her wacky sense of humor, her strong feminist ideals, her extroversion and fierce determination, her passionate love of all things beautiful, she could drink a sailor under the table, her DIY dressmaking skills (we all had to wear her clothes for good or bad), her personalized mini-artwork notecards, and her fantastic cooking in the tradition of Julia Child (oh she could make a sauce), she was a great friend to many and a wonderful mother and devoted grandmother. Joan was a Signature Member of National Watercolor Society, Albany Artist Group, Bethlehem Art Association, Colonie Art League, Oakroom Artist Group, and her favorite "Friday Painters" group. She was in numerous group shows in the region and won countless awards for her works. She was married to James R. Krathaus until his death in 2011 and is survived by her children: daughter Linda Krathaus of Selkirk, and son Alan Krathaus, wife Fiona McGettigan and their children Caoilin and Enya of Houston, Texas; her brothers, Joel and Thomas and their families; and was preceded in death by her sister Sally Grant and brother Robert Betz. Given the timing of her passing during the COVID-19 pandemic, the family will be planning a retrospective celebration of her life and artwork as a memorial service at a later date. In the meantime, the family welcomes her friends to view her works at her website, joankrathaus.com and to visit her online guestbook at applebeefuneralhome.com