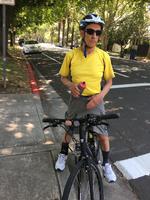 Dear loved ones of Jerry Tercho,

Most likely you know that my Dad died on June 10, 2022. I'm writing to share with you the obituary that we created: https://sites.google.com/view/gerald-tercho/home. Please feel free to share it with others.

We are planning to hold a "celebration of life" mass at St. Joseph the Worker Catholic Church for Jerry in September of this year, date TBD (https://www.stjoenash.org/).

If you have questions or thoughts or would like to be notified about the mass in September when we have details, please feel free to email me or my mom Lori, at matkatercho@gmail.com.

Gerald (Jerry) Peter Tercho died on June 10, 2022 at St. Joseph’s Hospital in Nashua, New Hampshire, just shy of his 85th birthday and his 60th wedding anniversary. Jerry passed away unexpectedly after routine surgery. Jerry was a steadfast and loving husband and father to his family; he is survived by his wife Loretta (Lori) of Nashua NH, his son Brad Tercho and daughter-in-law Joanne Tercho, his daughter Leona Cerbone and son-in-law Michael Cerbone, his daughter Karen Tercho, many beloved grand-pets, and much-loved cousins, nieces, and nephews.

Jerry was born in 1937 in Pittsburgh, PA to Marie Tercho (née Heinz) and John Tercho; the Tercho name was originally Tirscó (Czechoslovakia). Jerry grew up in Orchard Park and Amherst, New York, and he was very close to his beloved younger sister Vivian (predeceased). Jerry’s mom Marie called young Jerry “nature boy,” as he spent most of his time outdoors and rescued and cared for various animals, including a crow who had lost the ability to fly.

Jerry attended University of Buffalo and was awarded Bachelor of Science and Masters degrees in Chemistry. He had completed most of the work to obtain his doctorate before deciding to work full-time. Jerry met his wife Loretta (née Petynia) in Buffalo when he was a graduate student. Jerry and Lori married in 1962 and honeymooned in Boston. They lived in San Fernando Valley, California for two years before relocating to Massachusetts in the late 1960s where Jerry had been hired at New England Nuclear (NEN) in Boston. Jerry and Lori raised their three children in Lexington, Massachusetts with two German Shepherds in succession, Schatzi and Amber.

By all accounts a brilliant scientist, Jerry was a radiochemist working on diagnostic medicine using radioactive isotopes. NEN later became DuPont Merck, where Jerry worked for over 30 years until retiring. At work, Jerry found the balance between playfulness and high achievement. He loved to joke around with colleagues and was a friend and mentor to many. He was respected professionally and personally by his colleagues for his competence, intelligence, kindness, and sophisticated yet dry sense of humor. He loved making his family and friends laugh, and the jokes and laughs occurred frequently.

Jerry was an energetic early-bird - an upbeat, curious, kind, funny, and spiritual soul with a deep love for and knowledge of the natural world and its creatures. A consistent and enthusiastic donor to various philanthropic causes, Jerry also volunteered his time and skills to organizations such as Habitat for Humanity and his local food bank. After retirement, he read deeply, his favorite subjects being astrophysics and quantum physics. The book that Jerry was reading before his death was “How to Die in Space: A Journey Through Dangerous Astrophysical Phenomena” by Paul M. Sutter. Jerry was also a faithful Catholic who attended church every Saturday with his wife Lori. Over a period of many years he sang in the church choir and served as a lecter.

Over his lifetime and during his 20-plus years of retirement, Jerry enjoyed and excelled at many activities including running, karate, boating, fishing, skiing, camping, birdwatching, snorkeling, hiking, and cycling. Whenever possible he invited his children, nieces, and nephews to join in outdoor activities and learn with and from him. Jerry taught his children how to observe and enjoy the natural world with respect, awe, and curiosity. Notably, he instilled in his two daughters a love for camping, and in his sixties, he delighted in hiking uphill more quickly than Leona and Karen. Jerry is deeply missed by his family and friends.

In lieu of flowers, donations can be sent “In memory of Gerald Tercho” to either of Jerry’s favorite non-profit organizations: