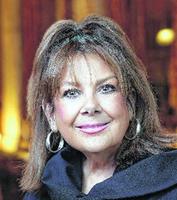 Kathy Curatolo, who as the longest surviving pediatric cancer patient at Roswell Park Comprehensive Cancer Center raised millions of dollars for cancer research and related charities, died July 9 in Roswell Park. She was 66.

She served on the board of the Roswell Park Alliance Community Foundation for many years and, with her husband Joe, created a team, Kids Just Want to Have Fun, to raise funds through the annual Ride for Roswell. This year the team of bicyclists and its affiliates raised $700,000.

Roswell Park honored her and her husband by naming the hospital's greenspace at Ellicott and Carlton streets the Kathy and Joe Curatolo Pathways Park.

She and her husband also established the Kathy and Joe Curatolo Endowment to support services for children, teens and young adults living with cancer.

To assist people through non-medical charities, they recently started another fund, the Joe and Kathy Curatolo Endowment, which fosters efforts such as Sleep in Heavenly Peace, which builds bunk beds that it donates to needy children.

Born in Buffalo, the second of five children, Kathleen M. Eagan attended St. Mark’s School in North Buffalo and was a student at Amherst Central High School when she was diagnosed with Hodgkin's lymphoma at the age of 16.

As she recovered, she decided to not to move on to adult care at Roswell Park when she turned 18.

“She stayed in the pediatric department for long-term follow-up,” her husband said. “She would see a pediatric specialist. Technically, she was the oldest pediatric patient. She celebrated her 50th anniversary in February.”

After high school, she worked for three years in the maternity ward at the former Children’s Hospital of Buffalo, then was an administrative assistant at financial planning firms.

She met Joseph V. Curatolo in 1979 when they both worked for Sherwood Securities and they were married in 1984. When he founded Georgetown Capital Group in Williamsville in 1987, she became a co-owner.

“She was the chief cultural officer,” her husband said. “She did client engagement and staff engagement.”

Particularly adept as a party planner, she was well-known for the large events she organized for the company and for charity.

A corporate affair for 350 people last September included music from the ‘60s rock group Gary Lewis and the Playboys. An earlier one featured a performance by Steve Lawrence and Eydie Gorme.

“She did it effortlessly and they were spectacular parties,” her husband said.

She also hosted fundraising evenings at their home in Clarence.

“She had 120 people at the house to raise money for Kevin Guest House,” her husband noted. “She raised a boatload of money at the spur of the moment for charities.”

A flair of decorating and design led her to open Victorian Romance, a boutique she owned and operated for 12 years in the late 1980s and 1990s on Main Street in Williamsville.

She took part in the Decorators’ Show Houses and her creations were regularly featured in local magazines and in The Buffalo News. She also decorated hospice rooms for charity with her sister, Kelly Rehak.

Her signature colors were pink and white and she was fond of lace, antique dolls and pillows. The one she treasured most was a 6-inch square she made herself.

"It's a little pillow that I covered with a piece of antique lace and then added my great-aunt's antique buttons. Some are porcelain; others are crystal and rhinestone. It's one of my favorite things," she told Buffalo News style writer Susan Martin in 1994.

She collected antique shoes, not to wear, but to use as decorative touches, hanging from bedposts or serving as doorstops. She also filled window boxes with flowers at her home, office and summer residence in Crystal Beach, Ont.

In addition to her husband, survivors include her mother, Margaret Eagan; three brothers, Michael Eagan, John Eagan and Greg Eagan; her sister, Kelly Rehak; and many nieces and nephews.

A celebration of her life will be held from 6:30 to 9 p.m. Wednesday at the Country Club of Buffalo, 250 N. Youngs Road, Amherst.